Biden wants to assure environmentalist voters, but does he mean what he says?

by Anush Arvind
in POLITICS
0

With the vote 15 days away, Joe Biden's environmental plan could tip the electoral balance in his favor. COURTESY OF GETTY IMAGES.

“I want young climate activists, young people everywhere, to know: I see you. I hear you. I understand the urgency, and together we can get this done”

The former vice president Joe Biden, in a virtual fundraiser in August, sought to appease younger, environmentally conscious voters with these words. Just days earlier he had announced a new $2 trillion plan to tackle climate change in a sudden departure from his older “F-rated” plan.

If Biden steps into the White House in January as President, he would inherit a climate crisis more pressing than ever before. But does Biden really “understand the urgency” or are his promises politics as usual? Let’s compare his ambitious environmental agenda to his voting record as senator.

Biden is generally perceived as a political centrist in Democratic circles. But his $2 trillion Clean Energy Revolution is definitively the most ambitious plan to combat climate change ever introduced by any major party ticket in American history. According to Biden, the Green New Deal is a “crucial framework” for his CER.

CER’s primary objective is to achieve net-zero carbon emissions and a completely clean-energy economy by 2050.

He promises that his plan would significantly modernize America’s infrastructure and auto-industry by incentivizing industries to cut carbon emissions. The transition, Biden claims, will create one million new jobs, all of which will allow workers to unionize. In addition, his plan calls for an elimination of power sector carbon pollution by 2035. The move to clean energy, which includes building 1.5 million “sustainable homes and housing units,” will create even more jobs.

Biden also plans to invest 40% of his clean energy plan’s investments toward minority and lower-income communities affected by climate change and pollution.

He has also pledged to not accept any campaign contributions from oil, gas and coal corporations or executives.

The environment has never been the centerpiece of Biden’s senatorial career. Nonetheless, he has demonstrated a desire to address climate change ever since it became a pressing, public concern in the 1970s. The League of Conservation Voters has given him a solid lifetime national environmental score of 83% based on his voting record over 36 years. 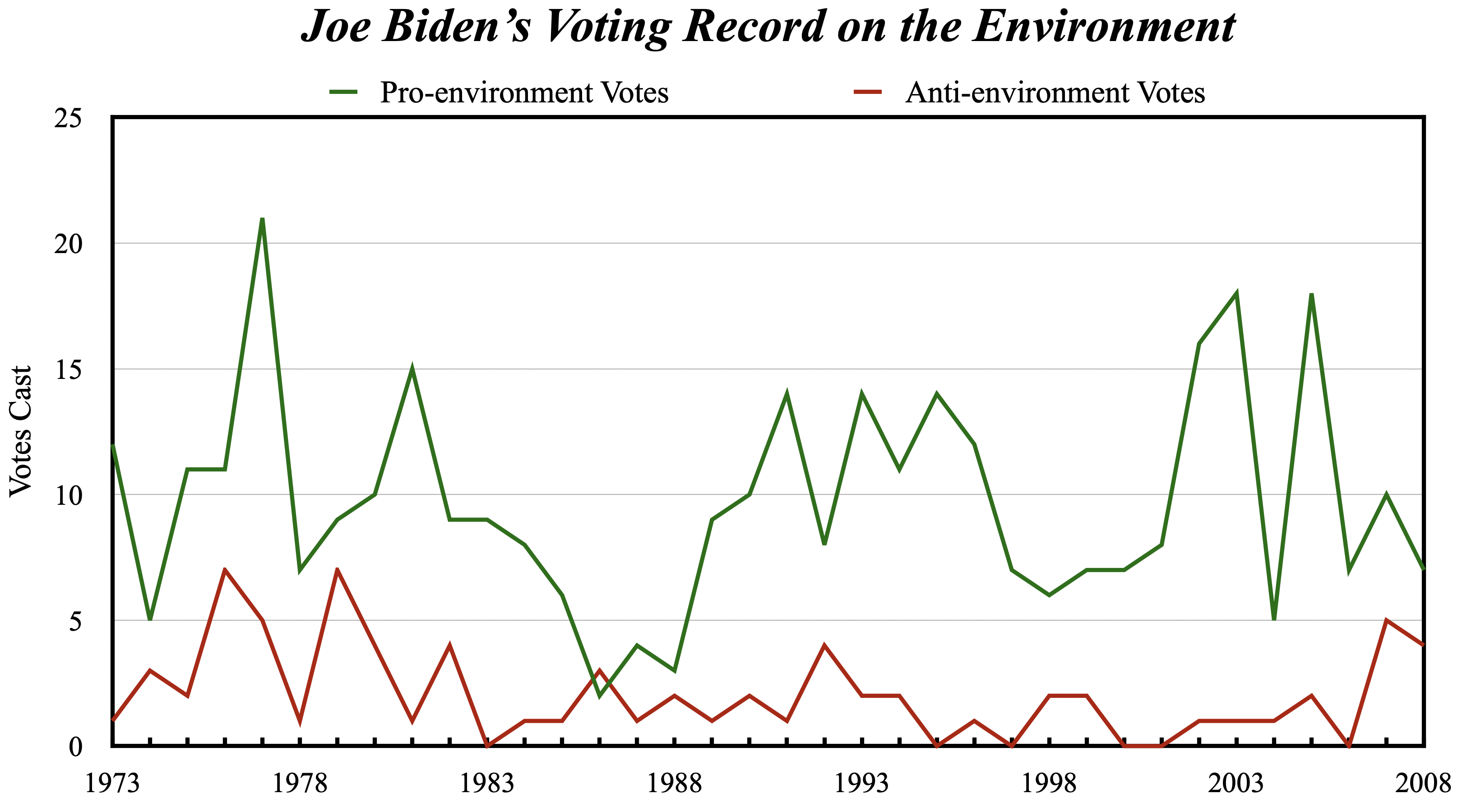 Joe Biden has largely voted pro-environment, with the League of Conservation Voters assigning him a score of 83%. COURTESY OF ANUSH ARVIND.

Biden has voted against higher fuel efficiency standards on five occasions, the latest of which occurred in 2005 when he voted against Sen. Dick Durbin’s (D) proposal to increase the average fuel economy standard to 40 miles per gallon.

In 2008, Biden failed to show up to vote on the Lieberman-Warner Climate Security Act, which was then hailed as one of the strongest efforts to curb global warming. The bill would have reduced America’s greenhouse emission by up to 19% below 2005 levels by 2020.

Though not entirely free of controversy, Biden has played a significant role in the shaping of Obama-era environmental policies, including the landmark $800-billion American Recovery and Reinvestment Act, which included $90 billion earmarked specifically for clean energy projects.

Biden does not have a stellar voting record when it comes to combating climate change. But his voting record spans a time no amount of climate activism from him would have had any effect on an otherwise apathetic Congress. The Lieberman-Warner Climate Security Act for which he failed to show up to vote, for example, would not have passed even if he had voted aye. His strategy of walking the middle ground, which meant he sometimes didn’t prioritize the environment, made sense then.

Despite this philosophy, however, he still voted to combat climate change 83% of the time – a record enviable to most Senators and Representatives. 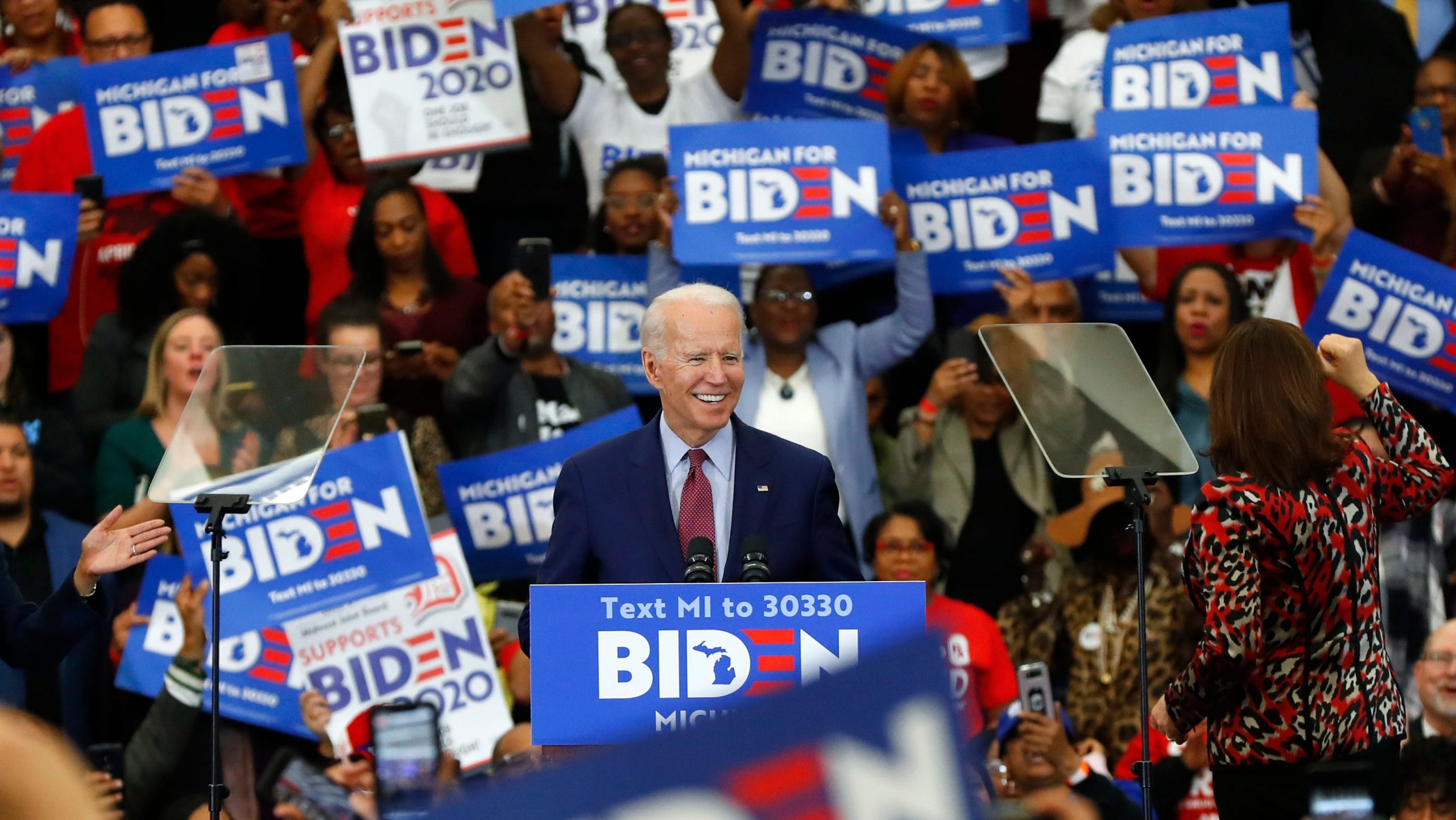 Joe Biden may have begun his campaign playing by the old rules. He has since reversed course in an effort to capture the progressive vote. COURTESY OF PAUL SANCYA VIA AP.

Biden’s mistake this election cycle was to play by the same outdated rules in a country extremely polarized on issues like the environment. His original Biden 2020 clean energy plan was met with derision by both environmentalists and industrialists alike.

He clearly learned from his mistake, though. His new Clean Energy Revolution is the most radical plan ever adopted by a presidential candidate ahead of the primaries. It may not make America a world leader in combating climate change, but it promises to mend the mistakes of the current administration, at the least.

We would love to hear your thoughts on Biden’s approach to the environment. Leave a comment below!

What’s the COP26?—Plus 3 Reasons to be a Climate Optimist

​​What is the COP26? What was discussed amongst world leaders to address climate change and pollution? Here are three...

Deforestation and Its Impacts on the Amazon Rainforest

The Amazon rainforest and its inhabitants have suffered greatly from deforestation, but there is still time to shape the...

Here's 7 reasons Trump is not the environmentalist he claims to be.