Every once in a while, Anush and his alter ego, The Contrarian, get into a scuffle about the latest in environmental politics. Annoyingly, The Contrarian sometimes has a point worth writing down. Today, Anush’s alter ego has decided to publicly sit down with him and talk about the rising popularity of plant-based meat, and whether it really is better for you and the environment.

A: Don’t be annoying. You know what I’m eating. You’re in my head.

C: Being annoying is my thing, okay, and just humor me, would you?

A: I’m eating a burger. Happy?

C: No, and also you’re not eating a burger.

A: I swear, if this is leading up to another one of your we’re-in-a-simulation-start-panicking moments, I will –

C: No, it’s not that. I mean, we’re definitely living in a simulation, but what I’m saying is that the meat in that burger isn’t real meat. It’s plant-based.

C: So you probably shouldn’t have it.

A: Why? Because it’s good for the environment? Because it’s a healthier alternative to animal meat? Because, despite all that, it tastes exactly the same as animal meat? Psh, go back to your corner and stop bothering me. Plant-based meat is one of the few completely good things we’ve invented. It could save our planet.

A: Says science! There are two major players in the plant-based meat industry right now: Impossible Burger and Beyond Meat. In a study conducted by the Center for Sustainable Systems at the University of Michigan, researchers compared the environmental impact of making a 4-ounce Beyond Meat burger with a similar beef product in the United States. The findings: Beyond Burger generated 90% fewer greenhouse gas emissions, required 46% less energy, and had a far smaller impact on water and land use than the beef burger. The Impossible Burger pulled in similar results. 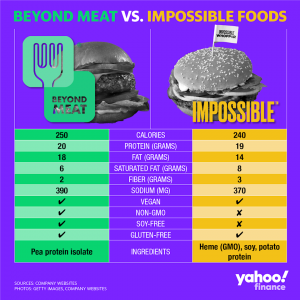 Beyond Meat and Impossible Foods often go head-to-head, but depending on who you ask, they have different and unique qualities about them. COURTESY OF YAHOO FINANCE.

C: Oh look at that, you forgot to mention that the Beyond Meat study was funded by – you guessed it! – Beyond Meat. And your source for the Impossible Burger results is literally their website. This is not to mention that the body of research into plant-based meat is not large enough yet to draw definite conclusions about their benefit to the environment. But, I will say, as will most scientists, that even though we may not be certain exactly how much plant-based meat will contribute to the reduction of carbon emissions, we can be pretty sure that it’s better in terms of carbon-emissions for the planet.

A: Well there you go. Leave me alone now, because I really want to finish this –

C: You know what else is plant-based and has a small carbon footprint?

C: Coca-cola. But you won’t catch anyone recommending a coca-cola diet, would you?

A: This is very dumb way to get your point across. But I get it. You’re telling me this burger isn’t healthy. But it’s literally made from plant stuff. How is that bad?

C: It’s not raw plant stuff though, like a salad. It’s highly processed, highly refined plant stuff, more like a packet of chips. Look, what I’m really telling you is that scientists aren’t ready to make a solid definitive call on whether plant-based meat is healthy, and you should be cautious about anyone telling you that it definitely is.

A: Okay, but is everyone really that clueless on whether plant-based meat is healthy?

C: We really need more research. But here’s what we know: the Impossible Whopper that Burger King is selling, for example, is lower in calories, fat, and cholesterol than the traditional Whopper made with beef. But it also has significantly more sodium (1,240 mg) compared to the original (980 mg) and several highly processed ingredients like modified food starch, cultured dextrose and soy protein isolate. And if you’re going to eat that burger with a side of fries and a soda, it is positively unhealthy. The bottom line: If you really want to be more healthy, plant-based meat isn’t your ideal option. Dieticians recommend you switch to whole foods instead, which are not only healthy but also extremely environmentally friendly.

A: But I don’t want to switch to whole foods. I really like burgers! And if I am to eat a burger, wouldn’t you rather I ate a vegan burger? Think of the cows I’m not killing, the rainforests I’m not cutting down. Think of the methane cow farts! You can’t take my burger away from me, Contrarian!

C: That I can’t. But I should be able to convince you that plant-based meat in its current form is not the panacea to climate change and an unhealthy diet that it is marketed to be. I mean, if you compare it to the gold standard in the animal meat industry – regeneratively raised, grass-fed animals – it barely scored much better.

A: Maybe I’ll wait a bit longer with the plant-based meat then? Dunno. I hear they’re coming up with lab-grown real meat soon, though. That sounds exciting!