With climate change top of mind, many manufacturers are doubling down on their efforts to implement more environmentally friendly business practices. Aside from being the right thing to do for the planet and its people, business metrics show that sustainable operations can also bolster financial performance.

That’s especially true in instances where going green has a direct, measurable impact on the bottom line. That’s been the case for Miller Industries, the world’s largest manufacturer of towing and recovery equipment. The company recently completed a company-wide lighting retrofit, upgrading to state-of-the-art, industrial-grade LED fixtures across all three U.S. facilities.

As a result, the company has seen its energy consumption drop substantially which not only made a significant dent in the company’s carbon footprint, but also paid direct financial dividends in electrical cost savings. Not to mention, the new, maintenance-free lighting delivers exceptionally better visibility to meet the company’s high tolerances for precision and quality craftsmanship.

Industrial lighting is a huge energy suck, consuming 58 terawatt hours of energy each year—enough power to light one-third of all homes in the country[1]. Producing that electricity generates more than 41 million metric tons of greenhouse gases annually, plus another 73,00 tons of nitrous oxide and sulfur dioxide.

Switching from conventional HID lights to high-efficiency LED lighting fixtures in industrial facilities alone could slash U.S. electricity consumption by 52 terawatt hours—the amount of energy it takes to light 37 million homes.[2] As a result, making the switch would remove 28 million metric tons of carbon emissions from the atmosphere along with 67,000 tons of nitrous oxide and sulfur dioxide.

At Miller Industries, the company was looking not only for the most environmentally friendly solution, but also a budget-friendly one. After getting quotes from a number of manufacturers and running a trial with four 18,000 lumen Vigilant High Bay fixtures by Dialight Corporation, Miller immediately saw the potential for big energy savings.

With the conversion from antiquated HID high bays to 1,750 new high-efficiency LEDs across its facilities in Hermitage, PA and in Greeneville and Chattanooga, TN, Miller immediately saw its energy consumption drop by 15%, not only lowering its operational costs but also its environmental impact.

One of the biggest issues Miller faced with its existing high-pressure sodium (HPS) lighting was the constant maintenance. Because HPS bulbs are prone to fast failure in harsh industrial environments, they required frequent changes. This was not only a hassle and a drain on maintenance resources, but also produced a lot of waste from the spent bulbs.

Worse yet, each HPS lamp contains enough mercury to poison an entire classroom of children above threshold limits.[3] With thousands of those lamps to dispose of every year, this puts employees at risk of mercury exposure, and it requires special hazmat disposal for remediation.

Miller virtually eliminated lighting maintenance by opting for industrial High Bay LED’s. With each fixture warranted to last 10 years, Miller no longer needs to stockpile and replace thousands of HPS bulbs. That not only eliminates the potential harmful impact of toxic mercury on employees and the environment, but also the emissions produced from manufacturing and transporting case after case of bulbs.

Aside from their high-efficiency, sustainable operation, the new LED fixtures also give Miller’s staff exceptional visibility with crisp, clear white light. As the company embarks on a new vertical integration program, shifting from assembly of prefabricated and outsourced equipment onto its truck frames to fabricating everything from the tires up, visibility was crucial for the precision work required on the laser lathes, press breaks, CNC and other precision machining tools.

“These quality tolerances are much tighter than welding tolerances,” said Bill Couch, general manager of the Greeneville facility. “We have to make sure the staff can read the micrometer accurately and see the finishes clearly. If you can’t see the part, you can’t make a quality part. Not only do we have a reputation to uphold, but this is our first time doing this kind of work, so it absolutely has to meet our standards and be successful.”

By replacing the antiquated HPS in its new fabrication area, Miller has seen visibility improve immensely and employees have taken notice.

“We gauge their response by their lack of response…when complaints go away, you’re doing something right, and we’ve not heard a single complaint in the finished areas about not being able to see,” Couch said. “We do have a few small areas that still need to be installed, and we’ve heard lots of complaints from folks there since they see such a difference, but of course, we’re working on that.” 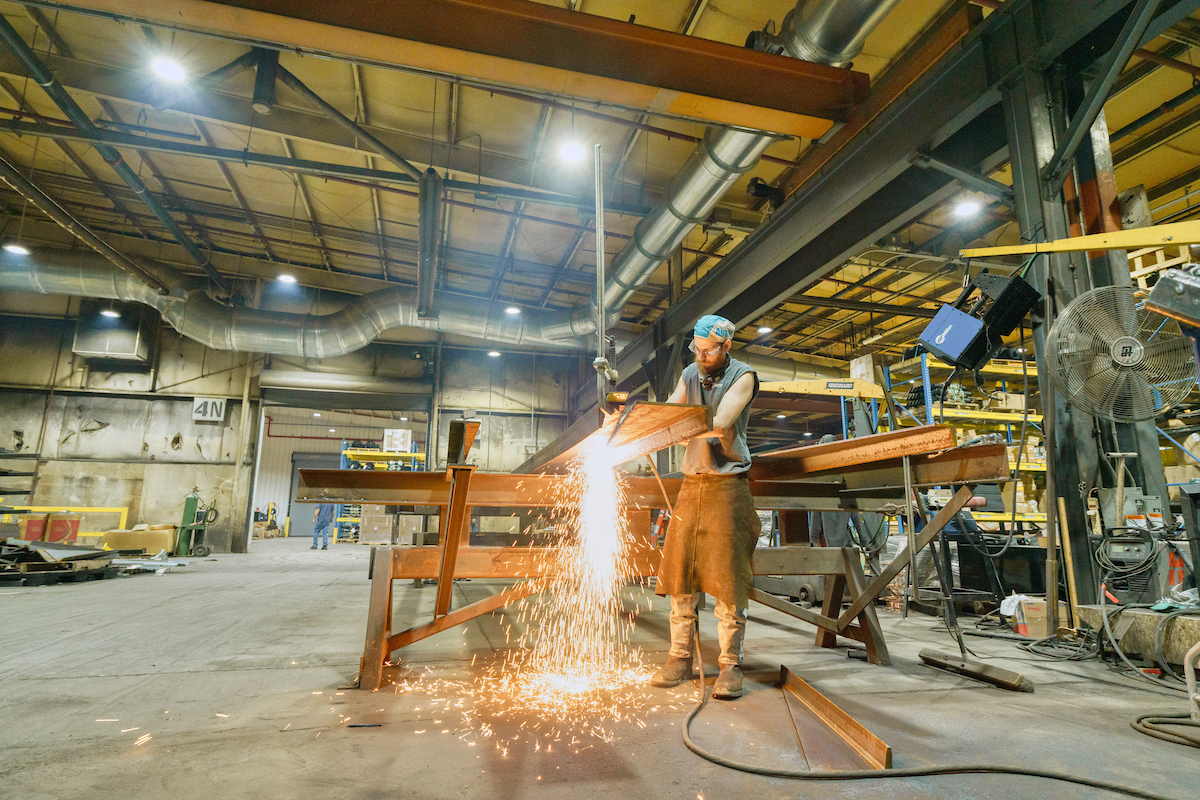 LEDs: A wise investment with low cost of ownership

As Miller has discovered, upgrading to industrial-grade LED lighting is a simple way for companies to make a major impact in achieving more sustainable and efficient operations. With the potential for big savings in both energy and maintenance costs, LEDs have proven to be an earth-friendly solution that delivers quick and substantial ROI with a low total cost of ownership.

LED lighting saves energy, but it’s worth mentioning its cost and eco-friendly features on account of not having to replace the bulbs nearly as frequently as incandescent bulbs. This is my humble opinion as a light fixture and chandelier installer in Sarnia.