CHECK THE FRACKS: Here’s what we do know about fracking

by Kierstin Blatzheim
in ENERGY
2

An examination of the potential benefits and costs of hydraulic fracturing in the United States.

If you saw the Vice Presidential debate between Vice President Mike Pence and Senator Kamala Harris the other week, you may have picked up on a bit about fracking. At the debate, both parties claimed their administration would not ban fracking, a process used to extract natural gas from below the surface. Even though natural gas is considered cleaner than some alternative energy sources and the fracking industry creates jobs, the long-term effects on the economy, public health and the environment are still being questioned. While natural gas was an important transition away from “dirty burners” like coal and oil, it may not be the final answer as energy use in the United States continues to rise.

Hydraulic fracturing, aka “fracking”, is a process used to extract natural gas from rock beds under the surface by injecting a mixture of water, sand and chemicals through a well and into the rocks to create cracks in the rock. Natural gas then travels through these cracks to the well where it is brought to the surface to be used for energy along with waste water. 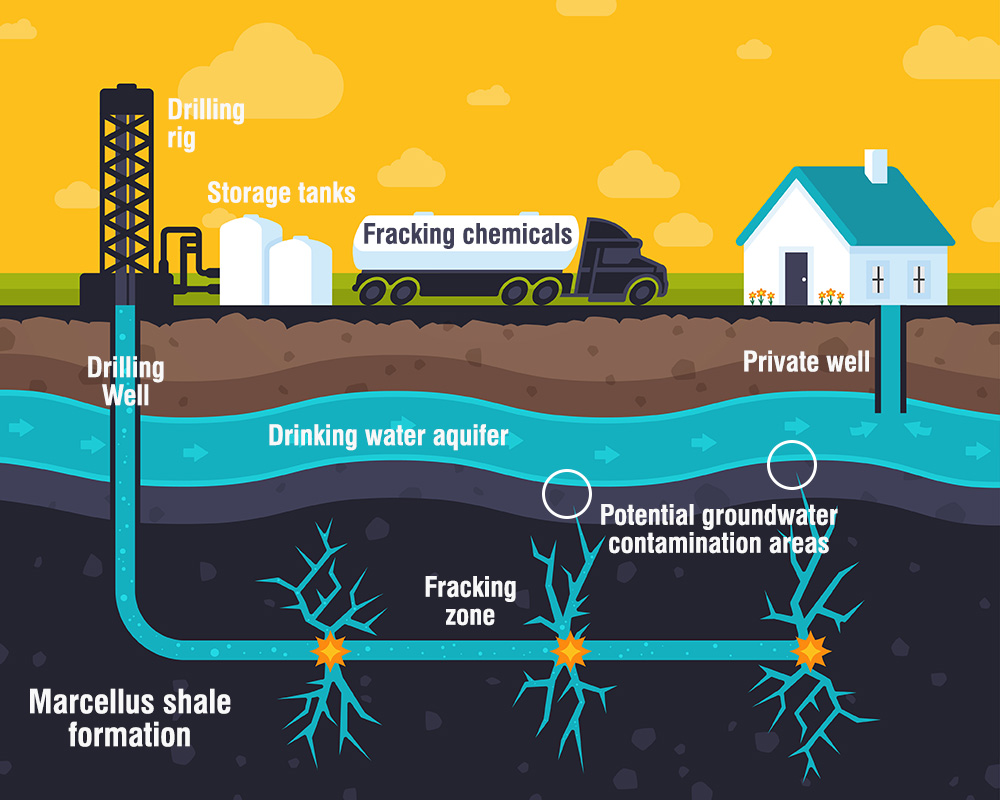 The process of hydraulic fracturing includes pumping a water-sand-chemical mixture through a well into the ground to crack open rocks to allow gas to escape. COURTESY OF CIVIC ISSUES AT PSU.

Although the first well dates back to 1821, natural gas experienced its biggest growth during the Energy Revolution in the 2000’s. As of 2019, there were 491,205 natural gas wells responsible for producing 32% of the energy consumed in the U.S. These wells sit on top of major shale gas reservoirs across the U.S., providing states like Pennsylvania, Ohio and Texas with major natural gas industries that have produced thousands of jobs, although exact estimates range from 636,000 to 10 million. Domestic production has also helped to lower the gas bill for many Americans and produced a net export ratio contributing to the country’s GDP. 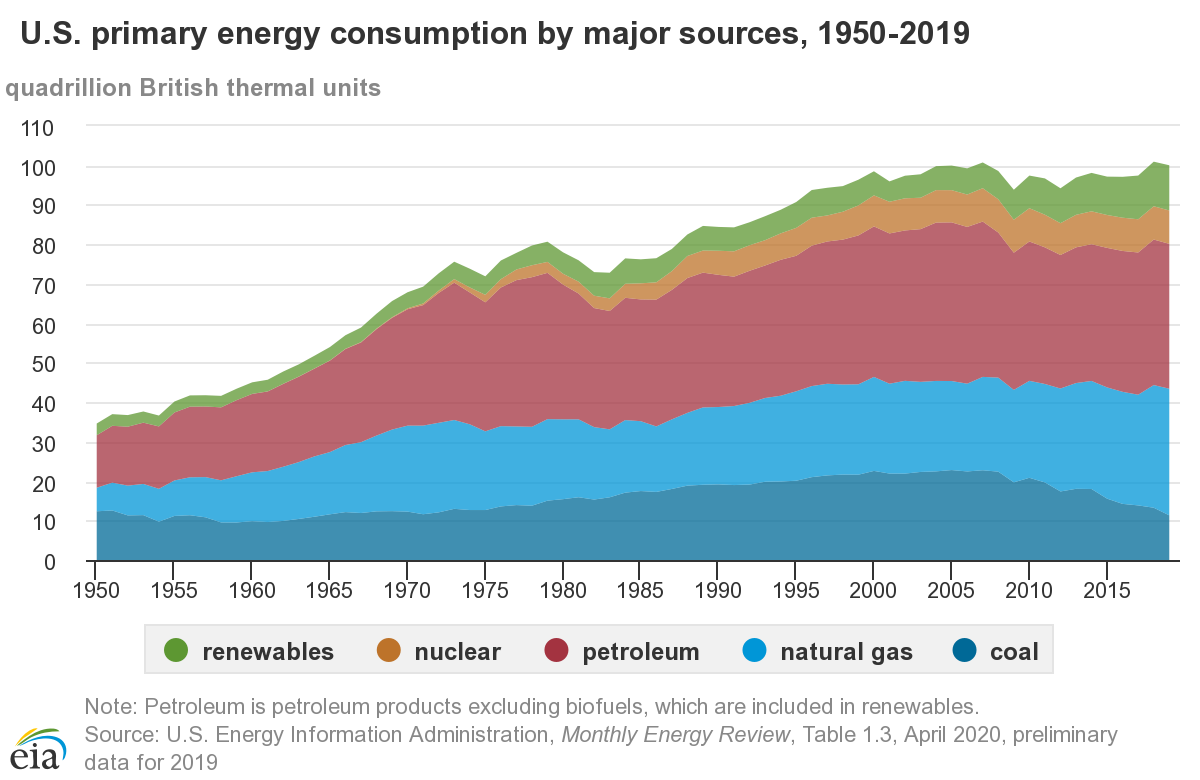 United States energy consumption has increased since the 1950s so even though cleaner energy sources are becoming more popular, emission levels are increasing. COURTESY OF U.S. ENERGY INFORMATION ADMINISTRATION.

Natural gas is considered a fossil fuel and is therefore non-renewable, however it’s ecological footprint is considerably less than alternatives. The industry’s carbon footprint sits at about 1692.9 metric tons of CO2 every year and contributes to 28% of methane emissions, but these numbers are significantly lesser than the coal and oil industry. There are also estimates that for every well drilled for fracking, 3-6 million gallons of water are used while for other power sources such as nuclear and oil, 2 and 3 times the amount of water is used for every energy unit respectively.

If fracking for natural gas is a cleaner and cheaper alternative to some other energy sources, why are so many people still against it? The answer lies in property rights and public health.

In the United States, we have what is called “fee simple estate” which means when someone owns a property, they own the surface – surface rights- and what’s below – mineral rights. If gas or oil is suspected to be beneath private property, companies can buy or lease the mineral rights from the owner, giving them permission to drill for the resources below the surface.

This becomes problematic because oil and gas do not respect political boundaries; they are free to move under the surface through soil and across property lines. This means in some states, companies do not have to pay adjacent property owners for the resources under their properties because they flow to the well.

Additionally, there are concerns over safety of drinking water sources. Fracking has the potential to contaminate drinking water in three stages: leaks in the wells, spills and improper wastewater disposal. The danger comes from two sources: the chemicals being pumped into the wells and the wastewater coming out.

The chemicals used in fracking fluid are often kept trade secret by oil and gas companies and because the burden of proving chemical safety is placed on the EPA rather than industries under the Kehoe principle, it is difficult for the EPA to know which chemicals to research. Of the 1,606 chemicals researched for the EPA’s paper on fracking, there was only limited data for 735 of them. The scare is that the 871 chemicals pumped into the ground without toxicology data could be potential carcinogens, neurotoxins, etc. If a leak were to occur in the wells as it already has in fracking areas of Pennsylvania, Ohio, Colorado and Wyoming, the public would be at risk. 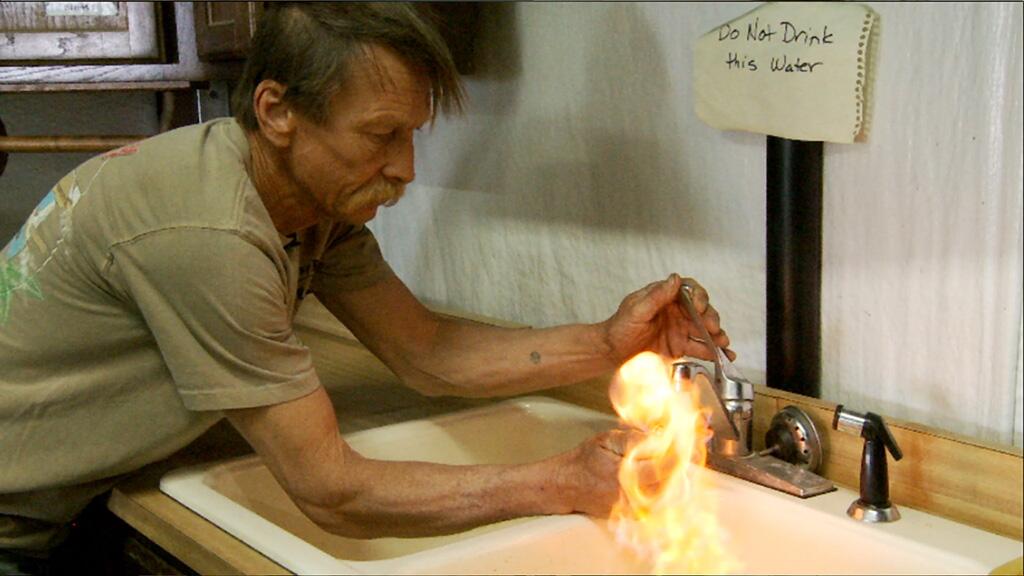 Hydraulic Fracturing has been accused of contaminating drinking water sources with chemicals and methane, a highly explosive gas. Here a resident holds a lighter to his tap water to show the dangers of methane in drinking water. COURTESY OF GASLAND BY JOSH FOX.

Additionally, wastewater brought up from the wells is slightly radioactive. Improper disposal can cause contamination of drinking water sources under the false assumption that water treatment facilities can recycle the water. Unfortunately, many water treatment faculties do not have the infrastructure to handle such contaminants. For example, in Pittsburgh, the fracking industry was able to dump radioactive wastewater from fracking into the Monongahela river for years without regulation.

The bottom line is fracking hasn’t been researched enough to fully know or understand all of the effects it brings to the environment and public health. While natural gas played an important role transitioning our energy sources away from coal and oil, it may not be our final answer as energy use continues to rise and still cleaner energies are known.

We are curious to hear your opinion on the good, bad and ugly of fracking. Please write a comment in the comments section below.

Texas produces more energy than it consumes. But when, say, a freak winter storm stresses the power grid, the...

Biden wants to assure environmentalist voters, but does he mean what he says?

Interesting article. One of the positive about the supply of natural gas produced through fracking is displacing the burning of coal, which each year contributes to the early death of thousands of people. Unfortunately, a new natural gas facility coming online doesn’t always replace a legacy coal-fired power plant.

Great piece! I see the good, the bad, and the ugly. I feel like the EPA definitely needs to get more information on those other 871 chemicals. In addition, I think more research should be conducted to investigate how much runoff the wastewater produces and where the contaminants go. Although there are some major flaws at least fracking is somewhat a step in the right direction. Right?

Receive Cosmic Channeler Chelsea Jeheber’s exclusive message from the Cosmos to learn why Earth is in the current state and how YOU can heal the planet.