What’s Transit-Oriented Development and Can It Help Climate Change?

If you ask a New Yorker what their favorite thing about the city is, they might say something about the nightlife, opportunities, or culture before ultimately settling on one thing: convenience. New York City’s subway system crisscrosses an expansive 248 miles (399 km) with 472 stations, making it easy (and cheap) to get from one end of the city to the other. But ask a Los Angeles resident who typically commutes 30+ minutes to work, and they might say they live in beautiful weather and in traffic, but optimistically dream of their city having effective, fast and convenient public transit.

Public transit, especially rail, has clear benefits for humans—accessibility, speed, affordability—and countries invest billions of dollars per year in its construction. But is extensive public transit good for the environment? Should we be building so much of it, and should we be building it at all? Spoiler alert: the answer is yes.

A Brief History of Public Transit in the United States

Public transportation has been around in the United States since the early 19th century with the establishment of steam ferry service between Brooklyn, New Jersey, and Manhattan in the 1810s. Horse-drawn streetcars were common by the mid-19th century before the electric streetcar gained popularity and influence in American cities around the 1900s. Los Angeles developed two large networks of electric streetcars (the “yellow car” network, operating within the city, and the “red car” network, providing service to outside suburban development), but the explosion of highway construction and a suburbanized American Dream after WWII lowered demand for rail services and increased the country’s reliance on cars and fossil fuels.

Los Angeles’ streetcars were converted to bus lines by 1955, and by 1963 all former electric services had ended. While most of the country’s public transportation experienced a similar fate, the cities with the greatest densities saw a continuous demand for infrastructure improvements and accessibility after the success of the streetcar. In 1963, when electric service ended in Los Angeles, the New York subway system had already been operating for 59 years. 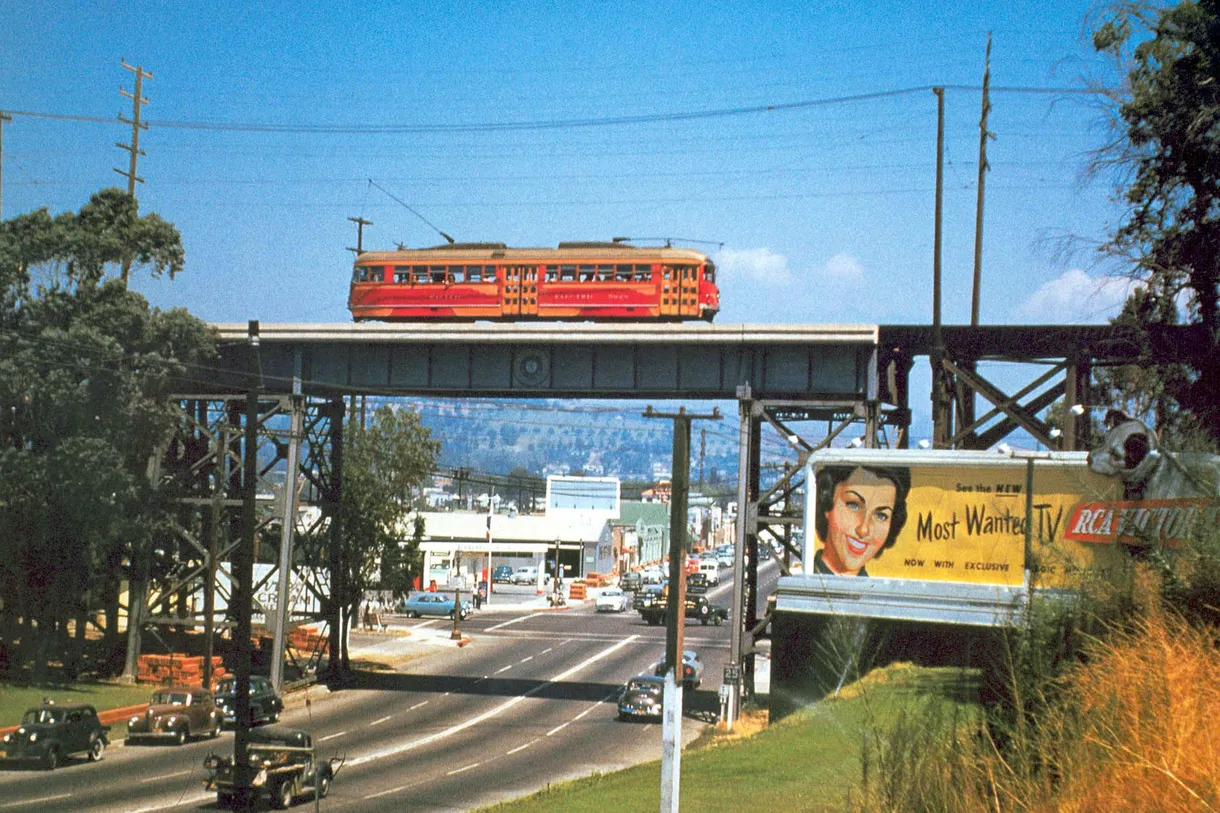 Today, 40 cities in the United States offer light rail or heavy rail public transit, but the majority of places don’t meet density requirements that deem public transit a worthy investment. However, like New York at the end of the 19th century, American society is again seeing a shift in demand. Traffic is increasing nationwide as housing prices push people to the outskirts of cities, lengthening commute times. For the sixth year in a row, the U.S. birth rate has continued to decline, and a larger number of singles and young adults are choosing apartment life over homeownership. The national focus has shifted toward federally-funded improvements in infrastructure with the Biden Administration’s Bipartisan Infrastructure Law. And of course, cultural recognition of anthropogenic climate change has resulted in a push for cleaner energy and green solutions. In the urban planning field, this mindset in favor of public transportation is called transit-oriented development.

What is Transit-Oriented Development?

Transit-oriented development (TOD) originated with architect Peter Calthorpe in the 1990s as a sustainable alternative to unrestrained urban sprawl that can be implemented to combat climate change. TOD encourages the construction of walkable, mixed-use communities built near (typically within 2,000 feet of) transit centers to improve human and environmental health. Mixed-use communities are those that contain a variety of land uses in the same area; apartments, retail, restaurants, entertainment, and necessities such as grocery stores share the same block. Apartments in TODs usually incorporate affordable or mixed-income housing to give people (often lower-income people) opportunities they might not otherwise have. These developments are designed to promote community and walkability—you’d be able to stroll or bike down the street for lunch instead of driving 10 minutes across town. While being able to walk everywhere is great, the central focus of TOD communities is a public transit stop that connects them to the rest of the region. Someone could live in a TOD without ever needing a personal vehicle since all of their needs are within walking distance of their home and everything else is accessible by transit. Calthorpe harps on the importance of walkable communities in an interview:

“We tend to think of transit as the big alternative to the car, but the reality is, in many circumstances, the alternative is the pedestrian and biking, and as a matter of fact, you can’t have a great transit system without walkable origins and walkable destinations.”

TODs might sound too good to be true, but places like this already exist. In Oakland, CA, Fruitvale Village was built around an existing BART (Bay Area Rapid Transit) station. The village was established in the early 2000s as a $100 million project with the majority of funds from the public sector. The community consists largely of affordable housing units, retail spaces, offices, and community resources built around the transit station. BART gives residents easy access to jobs, entertainment, or shopping in the city while providing a safe and walkable community as a home base. 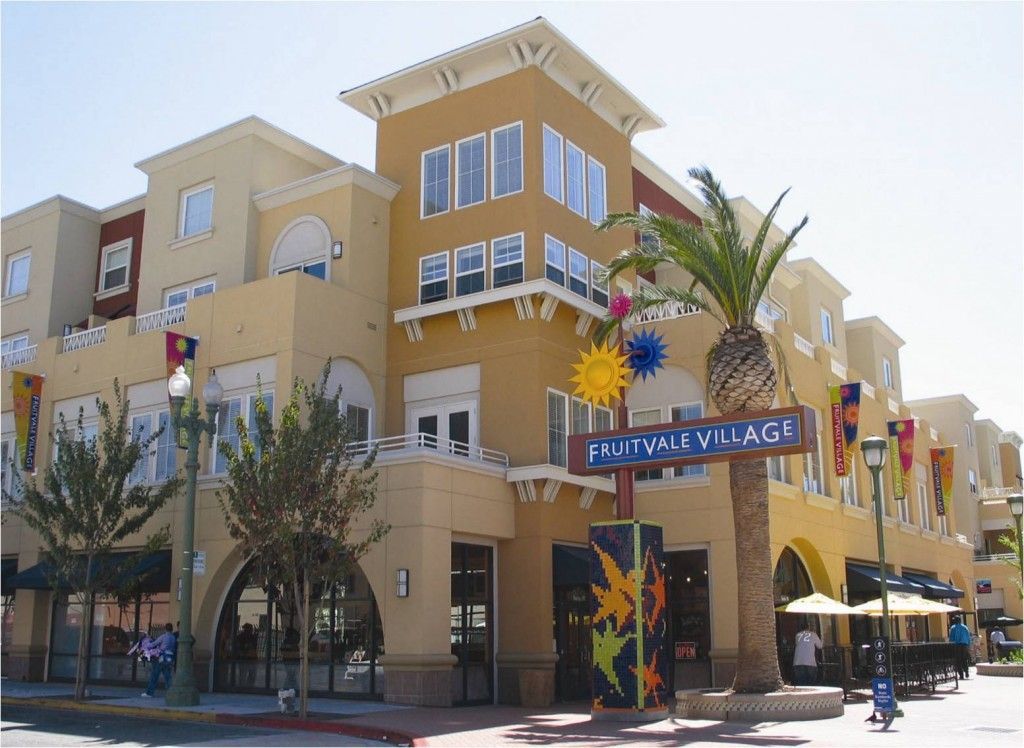 The entrance to Fruitvale Village, a TOD in Oakland, CA. Courtesy: The Unity Council.

At its heart, TOD is an attempt to respond to climate change in the built environment (the human-made places where we live, work, and play). There are multiple benefits that come with prioritizing public transit and mixed-use development. A facet of TOD is building up, not out. Multi-story apartments fit more people than single-family homes while taking up less space on the ground. Apartments are also more energy-efficient than homes — electricity use data shows that households living in apartments use nearly half as much energy as households living in a house.

Another benefit of TOD: when people don’t need cars, they also don’t need to use gasoline. They also don’t spend over half an hour in traffic, and can instead use their shortened commute time to read, rest, or respond to emails on the subway. The Center for Neighborhood Technology found that lower-income households drive 50% fewer miles when living near a frequent transit stop than those living further away, and people who live, work, or shop in TODs reduce their greenhouse gas emissions by 2.5 to 3.7 tons per year, per household. 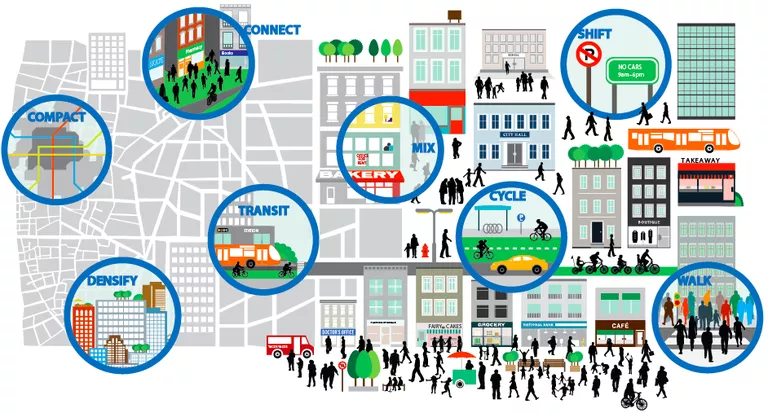 Transit-oriented development has been gaining popularity in urban planning since its proposal in the 1990s, but the newness of this concept in the U.S. limits its success when it comes to actual implementation. In some communities, the proposal of a TOD triggers concerns about noise and congestion in neighborhoods as public transit and high-density housing would bring more people in and out on a daily basis. In these situations, conversations with existing residents early on in the development process can help alleviate these fears by conveying the importance of TODs and how they can actually make the community more sustainable.

Current zoning laws in the United States also pose a barrier to TOD development. Most parcels of land are designated for one specific land use: residential, commercial, manufacturing, agricultural, etc. However, mixed-use communities purposely combine land uses, having many different types of buildings on one parcel of land. This makes the development of TODs a long process, as zoning laws in the area must be negotiated or changed on a case-by-case basis. For TODs to become more common, areas near transit need to be rezoned for denser development on a nationwide scale.

TOD represents a chance for the United States to plan for sustainable communities as populations expand and there becomes less open space to develop. Building mixed-use, walkable/bikeable communities close to public transportation gives people more mobility options while reducing reliability on fossil fuels. TODs promote environmental health by building up instead of out—less land is consumed by development. Walking or biking around town improves physical and mental health by offering exposure to nature while exercising. Job opportunities expand as people are given easy access to nearby areas.

If you’re interested in seeing a TOD developed near you, check if your city’s general plan is due for an update and attend community planning meetings, which are almost always open to the public. Advocate for affordable access to public transportation near you by voting for officials who support the goals of TOD.

What do you think about TOD? If you live in a suburban area, do you think adding access to public transportation is necessary or undesirable?  Do you suspect there’s already a TOD near you? Comment and let us know—we’d love to see!

Plant-Based Meat Is On The Rise, But Health Questions Still Remain